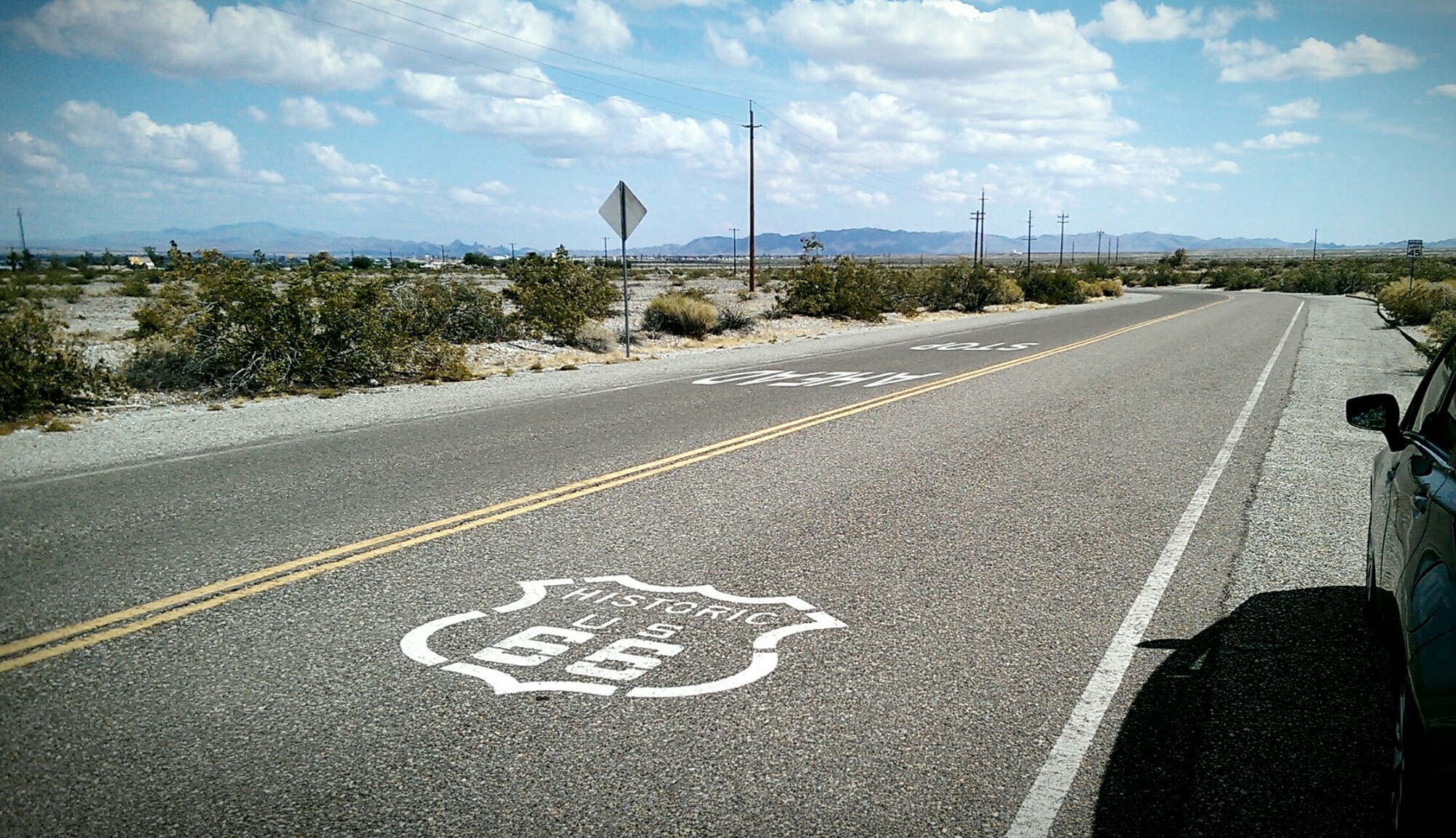 I open my eyes and stare at the ceiling. A run-of-the-mill motel room in an odd little town. My alarm is wailing as instructed, because today there’s a box to be ticked on the old bucket list. Not that I actually have such a list, but this close to the Grand Canyon, I can’t not go, can I?

Seligman, Arizona. The smallest of towns, cut into two pieces by the infamous Route 66. They say this is where it all started. Some local hero managed to have the surrounding chunk of it preserved and this place has been cashing in on it ever since. I sit on the edge of my bed, allow myself a big yawn and go brush my teeth. I may have seen this town before on documentaries about the historic highway. It always gives me a fuzzy feeling when TV life and real life start to mix. After flinging whatever I threw out yesterday back in my backpack, I zip up and head out the door to check out.

It’s cloudy, and there’s that familiar sensation of a place that’s been rained on recently. This morning smells like home. Not exactly a perfect day, but I’ll take it.

“You don’t want some coffee?”, the Serbian clerk says as I hand him my key and make haste for the door. The ‘free breakfast’ at this motel consists of one full can of coffee in the corner of the room. I’ll take that too. It was quite a surprise when this guy replied to me in Dutch last night after finding out about my origins, and so we pick up the pleasantries from where we left off. He asks me where I’m off to, and shares that the radio said the Grand Canyon weather today consists of snow and fog. Hmm. Very large Canyon. Thick fog. Snow. That would be a very unsatisfying ticking of the box.

My doubts about my trip loosen my grip on my agenda for the day, and I hang out while we further discuss life. He’s a retired psychiatrist helping out his friend, the owner. “All my life I haven’t been to a doctor once!”, he says. The man stayed away from fast food, alcohol and anything bad for his entire life. He tells me about his plans to move to a small house by the river somewhere in Serbia. He tells me the basic rules for a happy life. One. “Never let anybody cause you stress!” Two. “Never say sorry for anything, it’s of no use!” I like this guy. Who would’ve thought I’d find a wise man along the road like you’d only expect in movies. Why are they never running countries. Why do they always have to be in service stations or on park benches.

After a long hearty talk we shake hands and part ways. I decide to go find breakfast and wait out the rain in one of the kitchy diners nearby, you know, one of those places that’s world-famous for their pies or whatever. I told myself one day that I’d work to make travel, or location-independence, a standing option for every day until the day I drop dead. Life shouldn’t be a once in a lifetime trip followed by 70 years of boredom. I should never be forced to go walk the Great Wall of China only because I’m there and I’ll never get another chance. And today I don’t have to take that next left towards the Grand Canyon, because like anything, it’s not going anywhere anytime soon. After finishing my eggs and hashbrowns, I set sail straight ahead to outrun the clouds.

This is it. In my rental Chevy, cruising through Arizona, backpack and guitar in the back. At the end of this long road a mountainous horizon, the way those old racing games like Outrun used to look. This isn’t a trip. It’s a point in the making. This means, if I’m in Norway, and I’m meeting a friend in Colombia in 3 weeks, I can hop off the wagon in the United States and wander around to have a look as I please. Which is exactly what I did. This means I can want something, and then make it happen. This. Driving down a road. Somewhere on the planet. It’s why being at airports and at random lunch places are my favorite moments of a trip. It’s why you’ll hear the muffled sound of maniacal laughter from behind my car window as my GPS goes “Drive 235 miles on I-40”. GPS’s don’t say that shit in Europe.

I pass the exit that would take me towards my previous plans and keep going. Plans are nice and all, but about 95% of the time the only purpose they serve is getting me out of bed, and then *poof*, they are gone, as though they never existed. I have another box to check further down this road though. It’s called Meteor Crater.

“How’d you hear about the Meteor Crater!” Says the ticket guy, wearing his best 1990’s TV show host suit, looking like he was born and raised in the crater. I’m not much of a sightseeing guy. I’m more the kind of guy that would go to Paris and somehow forget to go to the Eiffel Tower. Itineraries filled with museums and statues are by default a plan B. Plan A is meeting that wise man you didn’t expect to meet and sticking around for a cup of coffee. But here I am at the Crater, and this I did want to see.

There’s something about staring at a huge hole in the ground, created by an object that smashed into the earth at godawful speeds straight out of infinite space tens of thousands of years ago, that makes you feel very very dumb for being sad when your favorite pants rip, or your phone breaks, or you missed an episode of your favorite cooking show and you now don’t know if Mark’s souffle was a success or not. This crater is staring at me, right in the face, casually and quietly explaining just how small I am and how short my life is. The baby brother of what killed off the dinosaurs.

After an hour of gazing I go reminisce in the souvenir shop, have myself a Subway sub (those guys are everywhere), and start cruising down the road again. I booked myself another run-of-the-mill motel in another odd little town up ahead. Tomorrow I’m heading down south, to a place I’ve heard so much about. Every documentary I’ve watched about reason, skepticism and its nutty counterparts has at some point featured this place. With its Vortexes and its crystal shops, the center for all that is New Age in the US. Tomorrow I continue towards Sedona. This one I’ll make happen.